If you are the sort of person (like me) that hates the thought that kids on the other side of the world are working in factories to make school uniform for our own children to go to school in then please read on.  This problem had been causing me unrest for several years.

I am Luke Conod, MD of SchoolUniformShop.co.uk, based in Herefordshire. We have been trading since 2001. We supply wholesale direct to schools and also retail both on and offline. In this time we have done our best for our customers and our team but at the back of my mind the challenge of tracing the manufacturers of our product and ensuring Fairtrade was a minefield.

In 2007 we were able to change all that and took the step to become an all-ethical schoolwear retailer able to offer bespoke badged school uniform online and in store. I am delighted to say that in 2015 we achieved that goal.

We are leading the way in terms of committing to ALL ethically sourced uniform. In detail this means that the following standards are met when we are sourcing all of our school uniform:

This has recently been recognised by Childrenswear Buyer Magazine (CWB), we have just won “Best Schoolwear Store” at their National Independent Retail Awards.

CWB Magazine said “A forward-thinking, socially engaged, ethical business that is leading the way in sustainable and ethical sourcing policy for school uniform.”

New for 2016, we are offering a badged bespoke wholesale school uniform service direct to schools via our established website and dedicated team.

Everyone wants to see children wherever they are with pens in their hands not tools. We are committed to providing great service with a good value, all ethical uniform for your children. School Uniform that matters.

We are striving to do the right thing and have a positive impact on our customers, colleagues, supply chain and our surrounding community and at the same time build a profitable and sustainable business…. People, planet, profit.

We donated 1% of everything that our customers bought from our website between 2010 and 2012 to help build a school in Nepal. We joined forces with Hereford Rotary Club and The Pahar Trust so that we could start to build a school straight away in Yangsila, Nepal. The first phase of the school was completed and officially opened in 2012 by myself who was also then Hereford Rotary Club president. In 2014 the final stage of the work to build the school was completed with the opening of the girls and boys toilets.

At the beginning of this year we donated new school uniform and children’s clothes to the refugees living in the Calais and Dunkirk camps via the Herefordshire Military Veterans who used the SchoolUniformShop.co.uk van to transport the items over the English Channel to Calais. It is current affairs like this that they are trying to help make a difference, as well as countries where poverty is all they know.

SchoolUniformShop.co.uk send new and used school uniform around the world with the Gloag Foundation, from Europe to Africa, wherever there is help needed by children in the world. 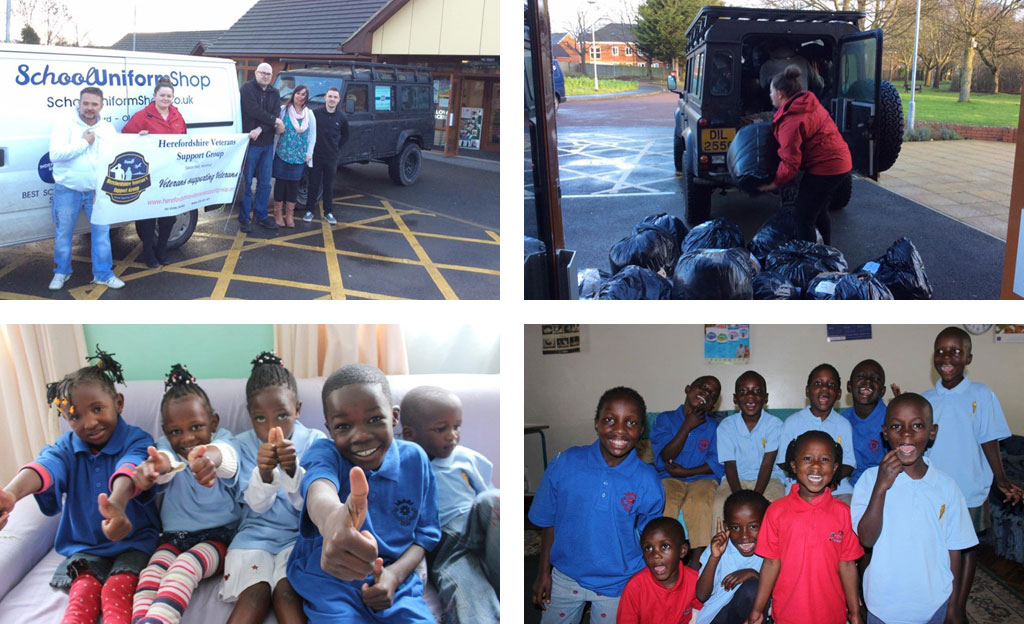 We proudly support ‘Stella in Cambodia’ who have already built a school in Snay L’a, Cambodia. In 2015-2016 along with other Trutex retailers and Trutex themselves we have paid for the building of a sewing workshop which has cost little over £5,000. The Cambodian school children have been helping the process by making bottle bricks using recycled materials such as plastic and carrier bags which will go towards a new toilet block and washroom. 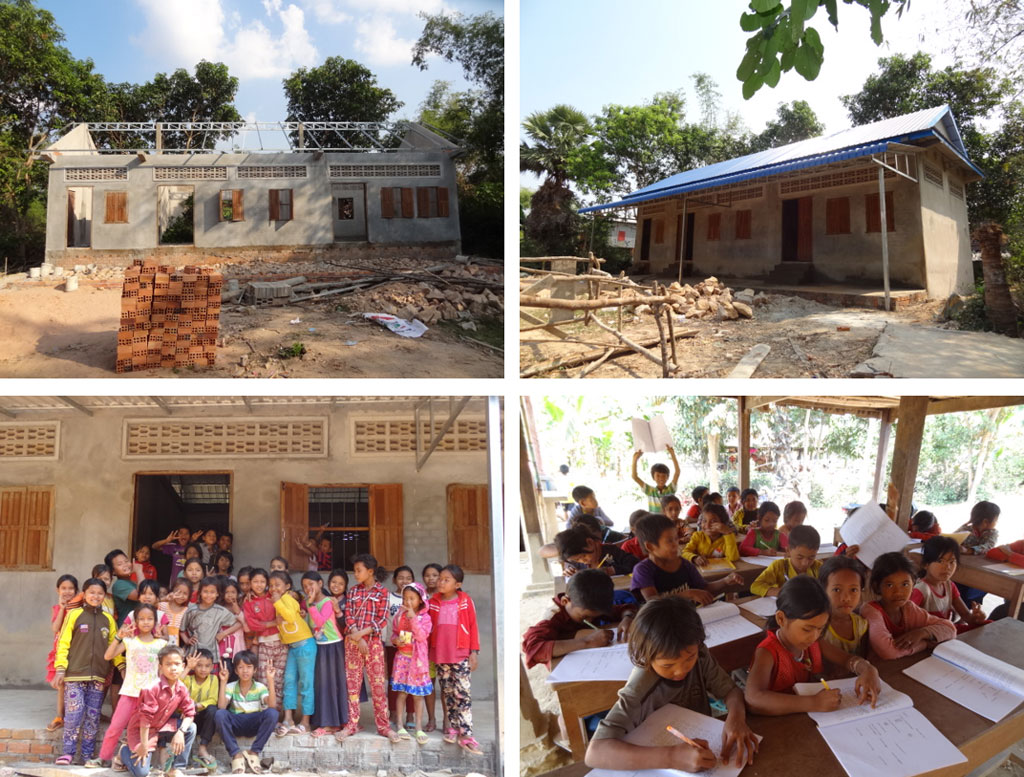 New for 2016, we are offering our Ethical bespoke badged school uniform service online via our website and dedicated team.

With the help of Hereford Rotary Club, and working with all of our schools in the Three Counties, we will be donating 5% of all badged school uniform purchased by you for your child to education and schools projects in Cambodia and Nepal.

We are aiming to be the very best school uniform wholesaler and retailer in the UK and our team are dedicated self-starters who are committed to the customers. We encourage this by ensuring that there is a full training plan in place, with experts coming in and offsite training. We ensure that everyone in our team is fully aware of our commitment not only to our UK customers but also to ensuring that we buy well and ethically. Our team is motivated by the fact we have raised considerable sums for overseas projects, and they also know that locally we support kids uniform when their parents are unable to afford it.

We are an approachable, trustworthy, friendly and kind team and wherever we have contact with potential customers and existing customers whether they are 5 or 85 we aim to put them at their ease and ensure that they get really good value and service from us at all times. 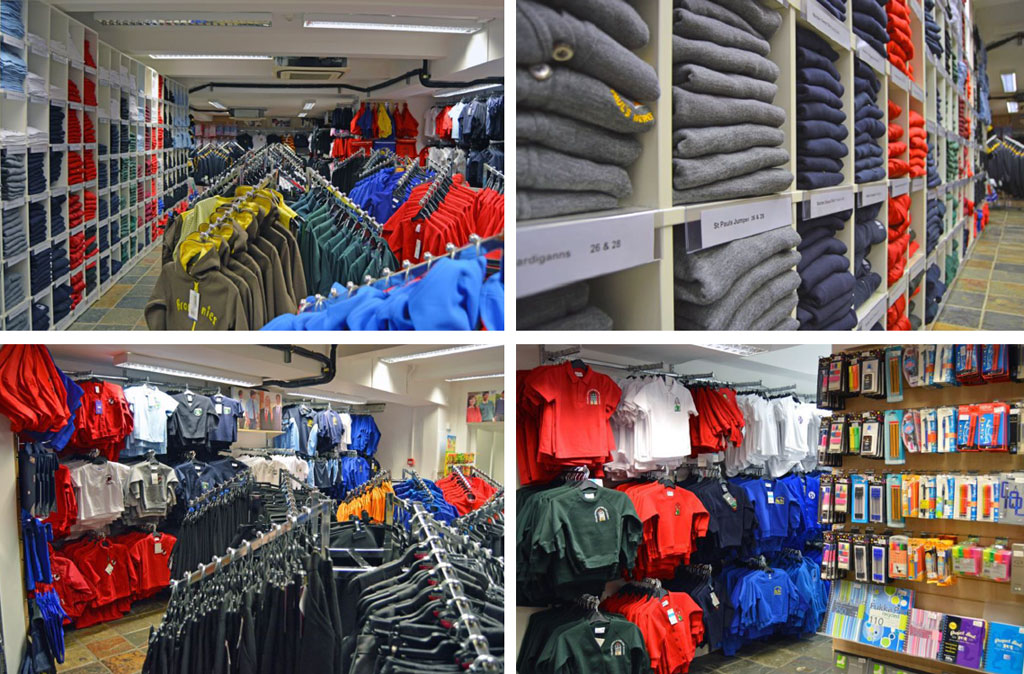 The story behind Emily Jones and Whitecross High School in Hereford, one of the first schools we worked with to supply all ethical school uniform.

Emily Jones was just 14 and about to sit her exams when she first met Luke at Whitecross High School. Skip ahead five years to 2011 and she won the first Face of FIT modelling competition! Shortly after winning the competition she began working in FIT and at our office as an admin assistant. Skip ahead another five years to now and Emily is the SchoolUniformShop.co.uk online supervisor and Digital Marketer for SchoolUniformShop.co.uk, shop and FIT.

“I remember the day I had the first photo taken back in 2007 with Luke (third child in from left). They got me out of class and asked if I would be in a photo to advertise the new, all-ethical school uniform for the newspaper. I think in some way it must have influenced me as I have a keen interest in current affairs and actively try to make small changes in my life which will help someone less fortunate. I want to do my best to help and I believe that by working with Luke and being a part of an all-ethical supplier of school uniform I am making a small change. I even visited Thailand for a month in 2013 and volunteered in an orphanage and a school to get first-hand experience of poverty across the world.”