Best days of their lives… with a little help from Hereford Rotarians in Nepal.
Lydia Johnson reports for the Hereford Times

Many children here in Britain moan about going to school. They cannot stand science, maths and the uniform. Their displeasure only grows when others tell them to enjoy school because they are “the best days of your life”.

There are even more children, living far from the UK, who don’t have to get up early, put on their uniform, or do their homework. But many of these children would give anything to do these things.

Twelve members of the Rotary Club of the City of Hereford recently met many children with a great will to learn when they travelled half way across the world. The city group went to the village of Yangshila in Nepal to help build a school that would change the lives of many.

Judy Smith Harris, one of the 12 travelling, knew this was something she had to be involved in. She helped the club raise £10,000 of the total £16,000 raised – every penny of which went to the school.

She said: “The school is so important because the whole village will benefit from its facilities. It is their way out of poverty. If they are educated and can use a computer, then they can bring their family and village out of poverty.”

Nepal may be one of the most poverty-stricken places on the planet, but, according to the group, it is also one of the friendliest. Despite not having the most basic levels of sanitation or health care – with 15 per cent of the population suffering from an iodine deficiency – the warmth and community spirit they show is enviable.

Luke Conod, club president and managing director of the School Uniform Shop in Hereford which raised £6,000 for the project, said: “We were overwhelmed by the welcome we received. We always had food, fresh fruit and water, but the whole time we were there we didn’t see anyone else eat anything. The main thing I’ve taken from the experience is never to moan – especially about a bit of traffic or the internet being down.” 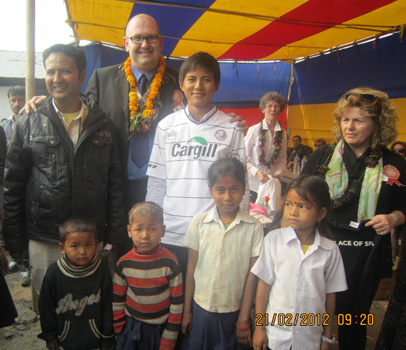 So with the help of building contractors and British based charity the Pahar Trust, the Shree Savitri Secondary School was built. The foundations of the school were laid a year ago by club members Rob and Margaret Soutar, and the school has come a long way since then. There are 50 to 60 children to a classroom and fund-raising is still ongoing to secure fully functioning toilets, reading material, furniture and electricity in some areas. But it is a start.

The 13 rooms – seven of which were built by the club – is the start the children, and the village, needs to keep them moving forward to a better future. For the many adults who look back on their school days with nothing but the pleasure of knowing they’re over, Luke said the children of Nepal offer a reminder of the luck youngsters have here in Herefordshire of just having teachers and somewhere to learn.

For more information and a video of the official opening please see http://www.schooluniformshop.co.uk/page.php/nepal.