Hereford United are one win away from making history on Saturday in their fourth round FA Cup tie at Division 1 Sheffield Wednesday.

They will don their orange away kit as they bid for their first-ever fifth round spot.

Chairman David Keyte said: “United have never been further than the fourth round. We are one win away from history. We need all the support we can get on Saturday. Come on you Bulls, it’s time to see orange.”

Hereford’s FIT shop Supervisor Natalie Jay above will be backing the Bulls. You can buy the commemorative T Shirts for only £5 from the FIT store in the City centre.

Luke Conod Managing Director of FIT commented “We are delighted to support Hereford United and everyone has their fingers crossed that we beat Sheffield Wednesday on Saturday.” 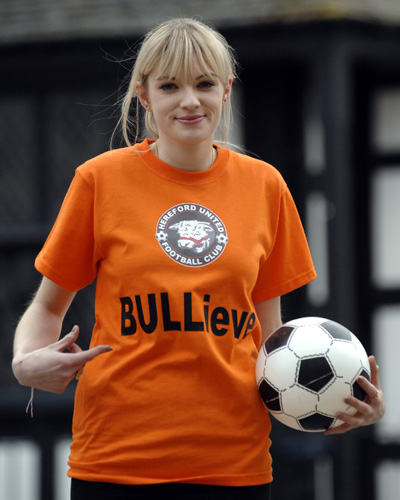 Cup wins over Hythe Town, Lincoln City and Wycombe have so far netted more than £100,000 and the Bulls are seeking another pay day.

Boss Jamie Pitman said: “We aim to continue this great cup run. Players who were out injured are back again and we have kept two clean sheets on the bounce.”

The Bulls remain second bottom of League 2 after Saturday’s game at Accrington fell victim to the weather.

Last night (Tuesday) they were hosting league rivals Morecambe as the Journal went to press.

Pitman is now without goalscoring Frenchman Mathieu Manset. He has joined Championship side Reading for an undisclosed fee expected to exceed the club-record £440,000 received for Darren Peacock.

But 19-year-old Birmingham City striker Jake Jervis has been drafted in on another month’s loan. He scored twice for the Bulls last season.

The club say there are no plans to replace Lawrence but are keen to strengthen the coaching set up to Pitman and assistant Russell Hoult.

On the transfer activity, vice chairman Tim Russon said: “Once someone has the mindset to move, it is usually best to do the deal. If and when players are needed they will be brought in.”

Pitman is understood to be talking to Oldham about retaining midfelder Rob Purdie, whose loan spell is due to expire shortly. Negotiations are also ongoing to keep Joe Heath.

Spaniard Guillem Bauza’s contract has expired and his future looks more in the balance, but talisman defender Ryan Green returns after suspension.
United’s league game with Wycombe has been re-scheduled from this Saturday to Tuesday, April 5.

Orange T-shirts are available for fans this week at the club shop and from the city centre FIT shop.